Update: The card is now live and available here.

The card has been unavailable for signups for the past few months. Existing Propel cardholders will be converted to the new card automatically. Propel World and 365 cards will remain unchanged (the 365 card is no longer available for new applicants). 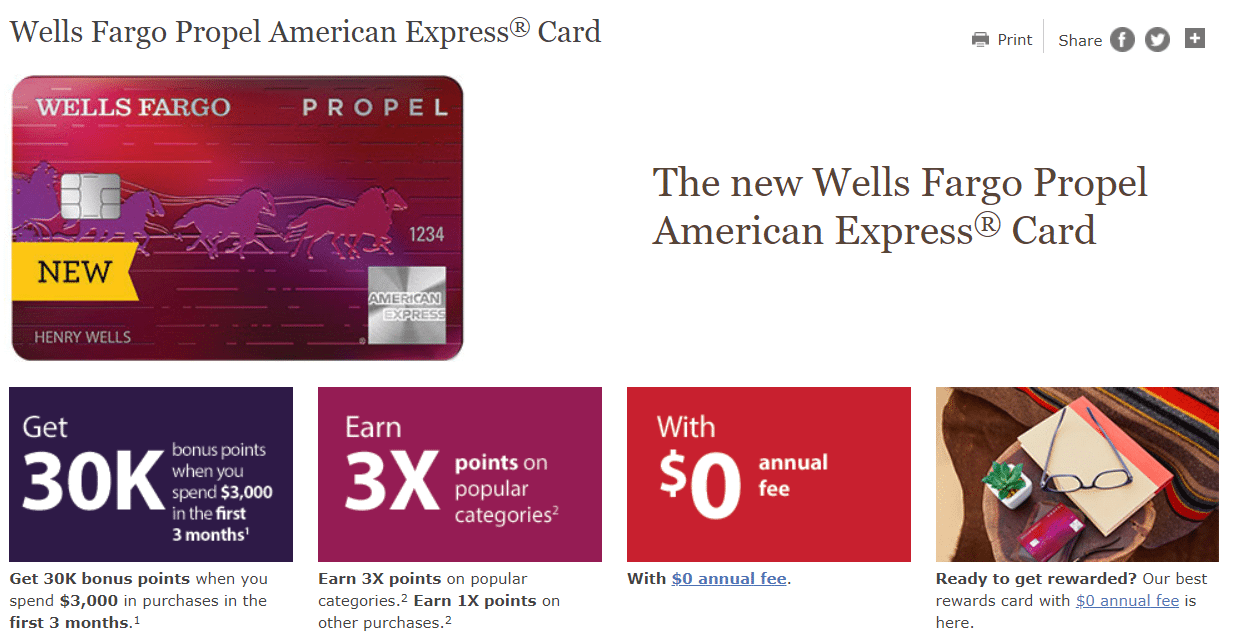 Wells Fargo typically only accepts card applications who have some relationship with the bank. However, with this card they’ll be offering the card to everyone.

The signup bonus will be as follows:

Points can be redeemed at a rate of 1 cent per point as cash back, travel, gift cards, or charity donations.

The card does not come with any transfer partners, though it’s worth noting that the bank is quoted as saying: “We’re continuing to innovate, and the ability to transfer points, as well as other features, is in our potential roadmap.” That could make things more interesting if it ever happens.

Earning 3% back on all dining and travel, even including things like gas, is a nice earnings rate for a no-fee card. That said, most of our readers won’t find the card useful due to numerous other cards which match or exceed that value. Particularly if you have the Chase Sapphire Reserve, there’s not much more to gain with this card. Plus, a lot of people are getting the equivalent of a 2.5-3% return on their everyday spend with a card like the Blue Business Plus, for example, which makes this card of little interest.

If someone has/gets the Wells Fargo Visa Signature with the ability to book travel at 1.5-1.75%, then the card becomes significantly more interesting, especially if you don’t have the Sapphire Reserve card, as you’ll be earning 4.5-5.25% on the bonus categories. And of course a lot of people will be interested in the $300 signup bonus as well.

Keep in mind you can only earn one Wells Fargo bonus every 15 months. It’s worth reviewing the other Things to Know about Wells Fargo Credit Cards before applying.

Is this card worth it simply for cell phone coverage? I’d lose about $4/month by billing to a 1% versus my CIC but coverage on 3 rather expensive phones would be worth $4/mo. Weighing it out against the CIP, it’s a loss of $2/mo but the added annual fee. Would have no other use for it other than the cell phone.

Looking at some type of coverage after spending $384 because of a broken back glass on an $800 phone that was less than 2 years old.

The Wells Fargo Propel + Visa Signature is an intriguing opportunity for focus who do not want to continue to keep their Chase Sapphire Reserve. If one does not use the DoorDash/Lyft promotions/credits. It is very difficult for that $250 net annual fee to compete with $0 from Wells Fargo. There is the problem with it being Amex instead of Visa though…

Presumably they realized that their target demo for a no AF card needs somewhat lower spend targets.

Anyone denied the 30,000 or 300 cash bonus after spending 3,000 in 90 days? Wells Fargo just informed me the bonus is not posted on my account but verified I had spent the 3,000 inside 90 days from card activation/account opening. How is it even possible NOT to get the Propel card and NOT to have the bonus available ? Was there a WF Propel card program last year where cards were applied and issued but without the 30,000 bonus offer ?

Can the points with the propel world combine with this propel?

Not sure if this is still an open question for you, but yes, the bonus did post. As long as you meet the requirements, it will post soon after the 90 day bonus period is up.

I went ahead and product changed to this because I had to cancel the Propel World anyway. The bad news is that it’s an entirely new account as mentioned which will hurt 5/24. The good news was no hard pull. The process on the phone also took a really long time.

I called to cancel my propel world, CSR suggested a PC to the propel. Once I got to the department that does the PC, it became clear after discussion that there is no PC. They close the old account, you lose the history and start a new app. Obviously, I didn’t want this, so I went back to CSR and closed the account.

It denied me with the reason
“Not a permanent US resident” which is basically green card for legal immigrants. I have plenty of cards and has been in this country legally with more than a decade time. was shocked to see this reason. I talked to their agent too and she confirmed this. Is it a new requirement , anyone experienced this ?