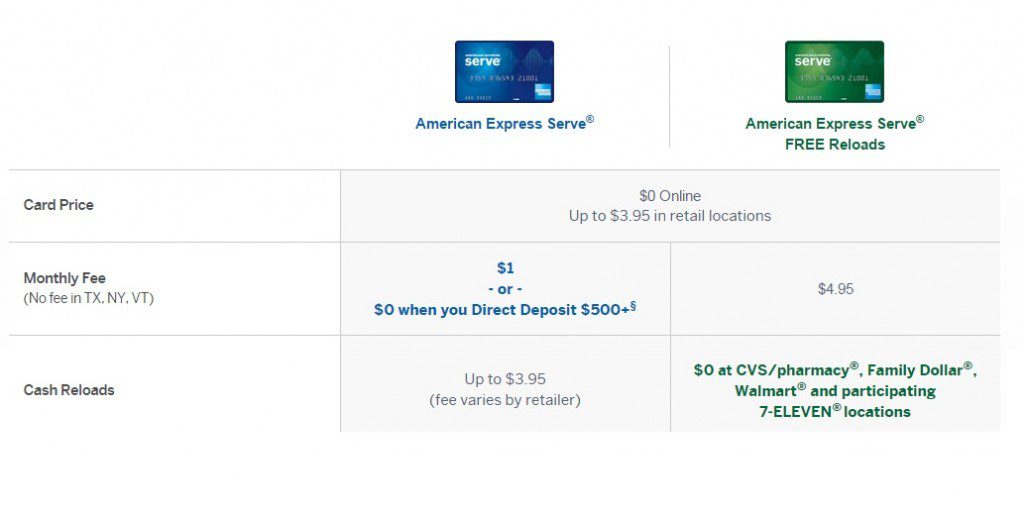 What Will Happen To Existing Cardholders?

For any customer who had the American Express Serve product as of August 5, 2015 and/or signed up online before August 5, their features and fees remain the same.

There is no word from American Express yet on what will happen to existing cardholders, but I imagine everybody will keep their original Blue Serve cards and then they can product change to the new Green cards manually if they desire.

Remember that American Express only allows you to hold one of these reloadable cards at a time.

The million dollar questions is if you will be able to reload the card with a credit/debit or gift card, if you can this will be massive news as lots of people have credit cards that earn a category bonus at drugstores. Although I don’t see why the introduction of this new card would change the rules regarding this (although it’s possible that because they are increasing their profitability they may be willing to take the hit on card loads).

Hat tip to reader Octavio and Out & Out

Octavio, thanks that worked great. There’s actually a Walmart listed about 11 miles from me (not 1 of the 3 I’ve been to). BTW, the reason you weren’t able to respond directly to me is because the site limits the amount of replies.

Cool!!! Glad to see that it worked for you. I got to tell you, though that finding a Walmart with Kate is half the battle! Out of the 6 that are nearby: 3 are usually out of order, 2 have a glitch where it asks for a 8-digit PIN number when trying to use a debit/gift card to load (I know the fix is to have the Walmart employees reset the machine, but it’s easier said than done) and only 1 consistently works. So…Godspeed on your 11 mile trip 🙂

I’d call first and ask if the “ATM” is working!

That’s a good idea. I’m not actually planning on going there but it’s nice to know there isn’t one that far from me.

Any info on if you can have this and Bluebird at same time or if it’s still 1 or another?

I could really use another card for liquidations….

Don’t see a reason why you’d be able to have both.

Doesn’t serve still allow debit loads via register?
The only thing different- is now it could be loaded at places like 7/11′

I was able to load $1,000 today into Walmart KATE without incurring a fee. Hopefully they won’t start adding fees for debit reloads onto Serve cards.

I have been to 3 different Walmarts and I have never seen this famous “KATE” that so many people mention. Is it only available in certain parts of the country? Does anyone have a link to a picture of one?

Kate refers to the Moneypass ATM machines. They are usually broken, but finding working ones is such a nice treat!!!
Use this link:
http://www.moneypass.com/atm-locator.aspx
Enter your zipcode and WALMART as the retail location, hit search and volia! It will tell you if your Walmart has one of those fancy, talking ATMs.

It doesn’t seem like the search feature works too well. I did what you said and other places such as PNC came up. Can you give me a zip code where you know a KATE is located so I can confirm that it works correctly?

@Eric
For some reason, I cannot reply to you, so I am replying to myself. Try 32725 and went you start typing “WAL..”select WALMART from the drop down, then click on “Search”
I can attest that all 6 Walmarts in that list have KATEs.

The details is in legal document https://www.serve.com/legal/FreeReloads/#limits . Credit funding requirement and limit are same as blue Serve. More over, any serve register online before 8/5/2015 is grandfather and only need fund 500 to waive fee. Newer card need 500 direct deposit.

At here https://www.serve.com/legal.html?intlink=us-serve-marketing-home-cashload-sku2015-footer-legal . There are two legal documents for blue serve depend on what date your register.

I wanted to get Blue Serve to fund with my new AMEX FIA Fidelity cash back card — that I received only yesterday!

Was not too interested in MS, just wanted low hanging fruit.

Now, it looks that I will have to do a direct deposit and that credit card funding won’t work.

William, should I not find a Temporary Serve Blue at my local CVS, etc which seems to have the numbers that would be grandfathered in as a basis to launch my new Serve account, can you outline what would constitute a Direct Deposit for AMEX Blue Serve and how one goes about doing that?

Well, the things they are a ‘changin!

There still seems to be one card that is a way around the issues thanks to your pointing out the Legal — It is the card targeted to African American consumers and also those who enjoy hip-hop music — The Radio One VIP card!

I am going to sign up for it now!

WOW!!!! Never knew of the existence of this card! This “GrayBird” or “Gray Serve” is the bomb!!! Old Blue benefits plus VIP benefits at the club, premium VIP seating to the hottest concerts, meet and greet with celebrities. Forget MS, those additional perks are priceless!!! ;-P

I am sure this card will start getting noticed when people dissatisfied with the new offerings start getting the VIP instead. Good call Horace!
Link below:
https://serve.com/onevip/

I’ll update you guys as to whether they really mean to not charge account fees if you put $500 in monthly via credit card spend.

Not that I will ever use those benefits — Hip hop ain’t my thing and I’m too old to change LOL! — but they are some nice perks, anyway.

And, why not provide greater benefits to this target audience, anyway, unfortunate to say in 2015, but likely a larger proportion of African-Americans are unbanked compared to the general population, and this is what the Serve products are primarily geared to SERVE anyway!

When did requirement for blue serve change to 500 direct deposit? It used to be only direct deposit earlier. This looks new. Sneaky

The terms for the “old” blue serve have not changed; you can get the fee waived by either receiving any amount via direct deposit or adding at least $500 from cash, bank account, debit or credit card (or having a $0 balance when they attempt to charge the fee). These new offerings are not as good as the “old” blue serve b/c they are almost taking the best features we currently have, making 2 different products and making you choose. The old serve currently gets free loads at CVS, Walmart, Family Dollar and 7-11 (and you can use debit/gift cards at Walmart/Family Dollar, CVS requires cash and not sure about 7-11) and fee waiver. The new blue serve gets the fee waiver but only if you do direct deposit of $500 or more and it seems that they’ll charge a load fee of up to $3.95 regardless of the retailer. If you want free reloads (something we enjoy now), you’ll have to commit to paying $4.95 a month with the green version. Hopefully, they grandfather current users for a while b/c changing to either one of the new versions means giving up something.

I agree with your assessment although admittedly I am new to this. I just posted my thought about this on another blog but I am a bit in a quandary as to why people think that the Green card will permit credit card loading — it clearly states in the offering materials Cash loading.

Now, some places may permit PIN enabled gift cards to be viewed as cash, but I don’t think that any will permit a credit card — since they cut back on this awhile back.

If AMEX wishes to charge some a “convenience” fee to load via the credit card, that is all well and good, but I don’t think that it their intention, as they must know by now that some people purchase their AMEX gift cards to start the process of liquidating them into MS.

By permitting credit card loading of Green Serve for a monthly $4.95 fee, they assuredly must surmise that they would see a fall-off (don’t know how big) of AMEX gift card purchases.

Consequently, I think AMEX is forcing one to choose between the “Birds” and Blue Serve in that one permits credit card loading and the other not, and Blue Serve and Green Serve for a flat monthly loading structure.

What I don’t understand is what is the benefit of Green Serve vs. the “Birds” — that you can also load via credit card vs. not getting that option but that you don’t have to pay for loading at various retailers?

If so, then Green Serve is doomed. Unless, they plan to institute some sort of fee for loading the “Birds,” as well?

You are right; at first glance, it looks like Green Serve does not compete with the “birds,” but it definitely depends on certain factors. Redbird beats Green Serve hands down if you don’t live in NY, TX, VT or don’t have an Amex card that still provides rewards for Serve loads (like the Fidelity one). However, if you live in those states, Green Serve provides a wider network for reloads with than Redbird and the rewards you’ll get from the Amex card loads, should more than make up for the $4.95 (if you don’t live in one of those 3 states).

However, if you don’t have access to a Redbird b/c it’s not available in your state/don’t have an out-of-state acquaintance who can get it for you or don’t have a Fidelity Amex or equivalent, Green Serve might be better than Bluebird. Bluebird does not have a monthly fee, but you are limited to reloads at Walmart, which is known not to play well with some Bankcorp-issued cards so that limits your ability to take advantage of deals that involve Vanilla gift cards, etc. Green Serve will have the $4.95 fee, but you’ll have more ways to unload gift cards so it’s definitely better for the MS game.

Your goals and your access to the different types of products will determine which product makes sense.